A ton happened on Monday and it was such an exciting day! I said goodbye to Elder Anderson, who is now in Rosario South as a Zone Leader! So that was a bummer, it was an awesome transfer with him. Then I was with the Zone Leaders, Elder Palacin and Elder Sovereign for the rest of the day. Elder Sovereign and I went to their apartment to grab some things and while we were in the taxi, he realized he didn’t have the keys. So we got to their apartment, and he had to break in to it to get the stuff he needed haha it was way funny. I’ll send a picture. Then we played futbol as always which is the best, and then I met my new companion! Elder Mathias from Coos Bay, Oregon who his eight other siblings all one year apart haha. He’s a very good, obedient missionary and I’m excited to work with him! He has 2 more transfers so maybe I’ll be his last companion. We had a great first day, and taught an awesome lesson to this family and challenged them to read the Book of Mormon, and during the lesson the dad was reading it and super interested so we are super excited to keep teaching them. Can’t wait for this transfer!

Tuesday was an awesome day but very hot and humid. We had an awesome lesson with this couple Antonela and Gaston, and they want to get baptized! We are going to work on setting a date with them for their baptism on Friday so we are super excited for that. We also saw the biggest grasshopper I’ve ever seen haha it was insane. I thought it was a bird flying at me, but then it landed and it was this like 10 inch grasshopper. Also, a dog got hit by a car today and all of the people were crying so that was sad. There are so many dogs here, it’s insane. Lots of galgos, they’re like greyhound type dogs. I’ll talk a little bit more about my area and what things are like here. There are tons of mosquitos and it’s super hot and humid in January and February so that’s super fun. Our area is a lot nicer than most others, there are a few houses like the ones in the US and that’s rare. Everyone drinks a ton of mate it’s insane. Everyone worships the virgin (Mary) here, lots of people think she is more important than God and Jesus Christ haha. There are lots of Jehovah’s Witnesses here and they will always try and steal our investigators and stuff so that is funny. Everything is good with my new companion! It’s weird not being with Elder Anderson, I miss that kid haha. Everything is good with Elder Mathias though! He is super consecrated and focused so that is good. I kind of feel like I’m training him at times instead of him training me because I know all of the people and places so that’s been a good experience. We are super excited for this week and for this transfer!

We are having tons of success! On Wednesday, we taught a bunch of lessons and found 4 new people to teach, which is great. We had a lesson today with this 14 year old girl named Milagros and she said she wants to get baptized! The only problem is she needs to come to our branch, because she’s been going to church with her boyfriend who is in another branch so we are trying to work that out. Then at night, Presidente Caon had a birthday party that he invited us to at the house of his mother-in-law who is a member, and it was soooo nice. They had a pool and this huge new house and this separate house for dinners and parties behind their normal house haha it was crazy. We had an asada that Pte. Caon made and it was way good. It was a good day and we are super excited for this transfer. Our mission has a goal and it’s “4 (cuatro) por Cristo”, which means four baptisms every month. We have a really good chance of reaching that goal in February so we are super excited and motivated.

Thursday was a long, hot, humid day but still with some success! We contacted this mom with her little son who we taught and it went super well. She was very interested and had lots of questions so we are excited to keep teaching her. Other than that, nothing too special, just lots of talking with people and walking in the street. Things with my compa are good! It’s still weird and different not being with Elder Anderson, but Elder Mathias is a great missionary who is teaching me a lot. We are excited to keep working together and have a ton of lessons these next couple days so it should be good!

There was so much rain on Thursday it was insane. Everyone has been saying for the last couple days “Watch out for the storm” and it hasn’t come but today it came and it was insane. All of the streets were flooded like a foot and my companion didn’t have boots hahaha so I had to carry him a few times. We were walking and there was this guy just kayaking down the middle of the street haha. It was a good day! We should have some baptisms coming up so that is way exciting.

Saturday was a good day! Just normal day of contacting and humidity. One of the dogs who we are friends with came up to us today with this thing in it’s mouth and it dropped it in front of us and it was just this old dead bird and it just ate the whole thing right in front of us haha. It smelled so bad.

Sunday was a good day! We had 2 investigators come to church who are on pace to get baptized, so we are super excited for that. During the first half of the church, there was no power in the chapel so it was all dark and the microphone didn’t work so the people had to talk super loud and it was so hot and humid, and it just happened to be the week Presidente Allred was with our branch haha. Then we were out contacting and we clapped outside of this house and this guy yells to us “come to the window”. So we walk up and he’s laying in bed in his boxers and he’d been sleeping with just all of the doors in his house open all alone haha. Then he got up and invited us inside and we were getting ready to teach him with just like, small talk. He asks us if we wanted food and we’d just eaten so we said we were okay and he sets an apple in front of us and says “eat it.” So we start eating the apple and we start our lesson and he’s talking about how Joseph Smith is our God and stuff like that and during the lesson. Elder Mathias was teaching and had taken like 2 bites out of his apple and the guy says “eat the apple.” and it was like this sketchy house and this guy living alone but it was funny and we aren’t sick yet so that’s good. But it was a good day!

We are excited for this week and to continue teaching our investigators. This week we’ve been trying to focus on the power of the Book of Mormon, and using that during contacts and lessons. 2 Nephi 31, Enos 1, Alma 7, Alma 32, 3 Nephi 11, 3 Nephi 27, Ether 12, Moroni 7 and Moroni 10 are the chapters we use a lot and they are all super good. Something I’ve really been trying to work on is my testimony of the Book of Mormon, and the more I read, the stronger it becomes. I’m seeing it bless people’s lives every day and I know that it has the potential to do that for everyone. I’m loving the mission and I know that this church is true. I love you guys and thank you for your prayers and everything!

Elders Cannon and Palacin (from Spain) 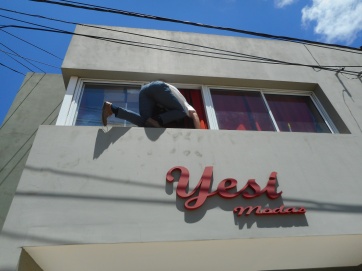 When you forget your keys 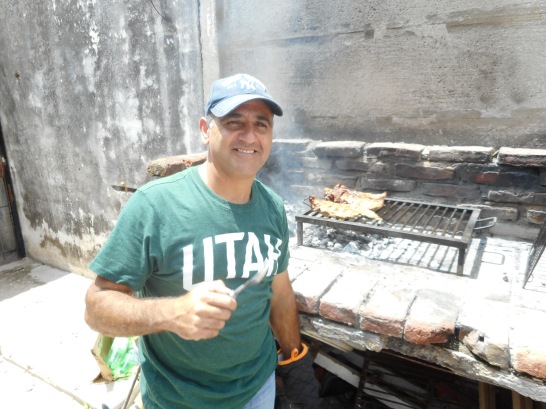