I was supposed to go to Rosario early on Tuesday morning because I had identification stuff to do, just like paperwork. But we woke up early and made sure that we had the bus schedule right and got to the bus terminal to find out that the next bus wasn’t leaving for more than 2 hours, which was later than when I needed to be in Rosario. We asked for a bus schedule, and literally, the only bus that they didn’t run during the week was the one I needed hahaha classic Argentina.

On Thursday, I went to Rosario with Elder Campos from Mexico to do stuff to be able to get my Argentina ID. While we were waiting in the bus terminal, we went to McDonald’s. It was heaven haha I’d missed it so bad. Then, I was able to see Elder Smith (comp for MTC/CCM) for the first time in like 2 months, which was way fun. I love that kid so much haha. We found out that they are going to send some missionaries to Tucuman next week, which is like a 12-hour bus ride, to get their ID’s. I don’t know if I’ll be going, but that’ll be an adventure if I do haha. We went and ate lunch in the Mission Home and then went back to Pergamino.

On Friday morning, we helped out someone who the other Elders are teaching named Marcelo replace his roof. He has a lot of animals behind his house, and he was showing them to us. He had these little ugly guinea pig type things (nutria in Spanish), horses, ducks, chickens, and a pig that we took a nice picture with.

On Friday night, this guy we have been teaching named Gabriel made us some nice chorizo, sorta like sausage, for dinner. That was super nice and good haha.
We were out contacting in the rain on Saturday morning and some guy in front of us flips a U-turn on his motorcycle and comes up next to us. He asked if we were Mormons and we responded kind of haha and then he asked if we could go by his house because he wanted to learn more. He lives outside of our area but we got his address and it’s just cool to see the Lord’s hand in His work.

The power went out on Sunday morning, and it was out during all of church. It came on at like 2 or 3, and we heard that the WHOLE COUNTRY lost power, and parts of Uruguay and Brazil haha that’s insane. over 50Million people lost power.
Familia Gimenez gave us a Father’s Day asado, which was super good. I’ll send pics of our meal.

It was a good week! Excited for another one. I love the mission!

Eating during the Blackout 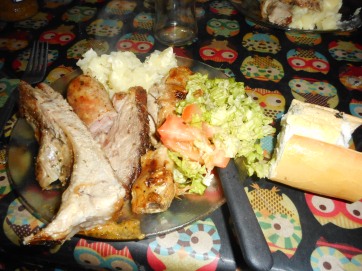 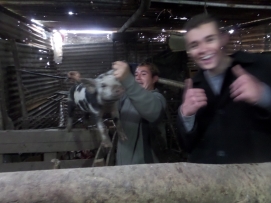 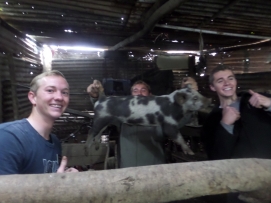 Marcelo and his pig